The first batch of data from the April 2016 Census of population in Ireland has been published today.  Given its comprehensiveness, the Census, performed every five years, provides the most detailed and accurate picture of structural developments in the Irish population.  The data confirms the ongoing demographic advantage that Ireland has over the rest of Europe.  Given the confusion caused by this week’s Irish national accounts, the uncomplicated nature of the data should come as some relief!  There are many interesting aspects to the data, but three are worth pointing out in particular in our view:
Irish population continues to grow well in excess of European norms
The CSO estimates that the Irish population stood at 4.76m in April 2016.  This represents an increase of 170,000, or 3.7%, relative to the 2011 Census.  This compares to estimated growth of 1.1% in the population in the euro area over the same time period.  Over the five year period, a natural increase in the population of 198,282 was offset somewhat by net migration of 28,558.

Big regional differences, Dublin seeing the fastest growth
Dublin (+4.3%) saw the fastest population growth, followed by the counties surrounding the capital (Leinster ex-Dublin, +4.3%).  The population of Ulster (Border counties) hardly grew at all (+0.4%) due to large migration flows.  Dublin was also the only region to see a net increase in migration flows over the period, highlighting how Dublin has remained a magnet for foreign labour.

Vacancy rates down, with huge differences across the country
The vacancy rate (excluding holiday homes) stood at 9.8% in April 2016, down from 11.5% in April 2011.  However, within this national figure, there is a huge range.  The lowest rate is South Dublin (4.0%), with the highest being in Leitrim (20.8%).  Indeed, a significant number of the areas with the highest housing vacancy rates have seen population declines, proof that while there is excess supply, it is largely in the wrong areas of the country.  We have previously estimated a “normal” vacancy rate of 7%.  The Census data confirms that vacancy rates are below this level in most of Dublin (apart from Dublin City surprisingly) and Wicklow. 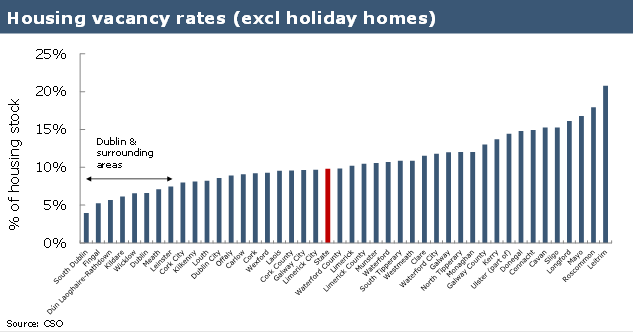